Why didn't the participant receive the survey I sent?

If a study makes use of the Surveys (ePRO) feature and surveys are not sent as expected, there are several things you can check in the study. Find out how to troubleshoot issues with the delivery of surveys below.

Sent: The survey invitation has been sent, but was not yet opened by the respondent.

Failed: indicates that the survey invitation was not sent to the recipient. The most likely reason for a send failure is that the patient's email address is incorrect. The failed status is still under development and does now only work for re-sending an invitation.

If the invitation's status label is 'Sent' but a participant did not receive the survey, it is advised to consider the following scenarios:

If the surveys are sent using a schedule, it is recommended to check whether the schedule is set up correctly. In the case where several surveys should be sent in certain intervals starting from the present time/date, it is important to include 0 at the beginning of your schedule.

For example, if a survey needs to be sent on three occasions at an interval of two weeks, the schedule should be as follows: 0,14,28. The 0 in the beginning of the schedule indicates that the first survey should be sent today (now), again in two weeks and the last one in four weeks.

Below is an example of a correctly configured schedule:

This schedule can be applied when creating a survey invitation: 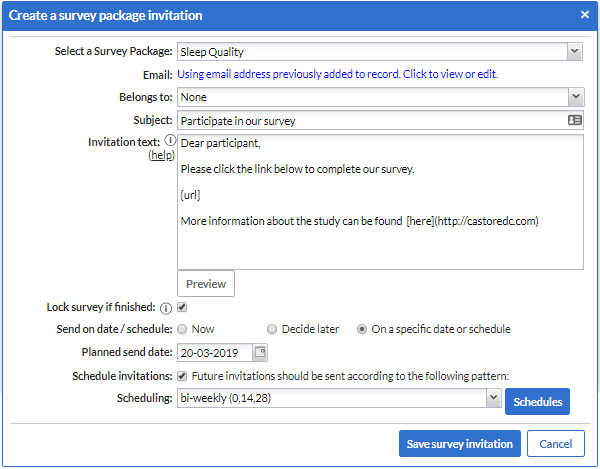 Once the schedule is applied, the survey invitations will be planned in the following way:

Choose files or drag and drop files
Was this article helpful?
Yes
No