Export data into SPSS in EDC/CDMS

Export data into SPSS SPSS Export troubleshooting Check the data file path Check the dataset on the "Active" dropdown Variable length Export in a wide format and merging data files Export to SPSS when using a Mac computer Troubleshooting SPSS My calculation fields are empty My numbers with decimals are not shown properly I get the error message "File not found". My data does not match up with my variable names. I get the error message "Duplicate variable name (only first 64 characters are counted)".

To export your Castor data into SPSS you will need to follow a few steps, please see below:

From this folder containing the unzipped files you start importing the data to SPSS.

If for some reason the above steps don't work you can try the troubleshooting below to try resolve this:

This is the most common cause for errors. So we strongly advise to check the data path of the file .dat.

Check the dataset on the "Active" dropdown

Another way to resolve issues on SPSS exports is by verifying the selected "active" dataset (the right option in the screenshot below):

We suggest to open a new, unnamed dataset and select the ‘unnamed’ dataset instead of dataset 1 or any other named dataset on the "Active" dropdown.

SPSS files have a variable limit length of 64 characters. It is worth checking if any of your variables is bigger than this.

Export in a wide format and merging data files

Export to SPSS when using a Mac computer

When exporting Castor data to SPSS on a Mac its a bit trickier to put the directory of your data in the .sps file.

After you extracted your export file (the ZIP file) you get a directory containing at least 1 set of .dat and .sps files (data + syntax). You then have to rightclick 1 of them and select "get info". You will see this popup: 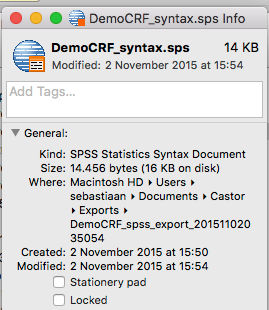 After this rightclick the last part after "Where:" (the part that ends with _20151102035054 in the image), you can copy the directory name. You can now paste this in the syntax in the location where the data path has to be. In this case that would be:

The bold part is the part pasted in. If you then run the syntax using the play button the data should be imported.

My calculation fields are empty

For example, you will see:

My numbers with decimals are not shown properly

If you use numbers with decimals, then the default decimal separator in Castor is a period (.), while it can be a comma in your SPSS. To change this, add the following line in the third line of the syntax in your .sps file:

I get the error message "File not found".

SPSS cannot find the data file. There are several explanations:

My data does not match up with my variable names.

It is possible that your visit/form/repeating data/survey (package) name includes a semicolon (;). Since the delimiter is a semicolon, SPSS will see the name as two values, causing your data to shift one column. You can solve this by deleting the semicolon from your visit/form/repeating data/survey (package) name in Castor and replace it with a different character.

I get the error message "Duplicate variable name (only first 64 characters are counted)".

SPSS only allows variable names up to 64 characters. This error message indicates that your variable names are too long and that SPSS views them as duplicates.

For example, your variable names in Castor could be:

In SPSS, the variables will be the same, which is not allowed:

You can fix this by shortening the variable name in Castor. If this is not possible, you will need to manually replace the variable names in the syntax at '/VARIABLES', 'VARIABLE LABELS', and 'MISSING LABELS': 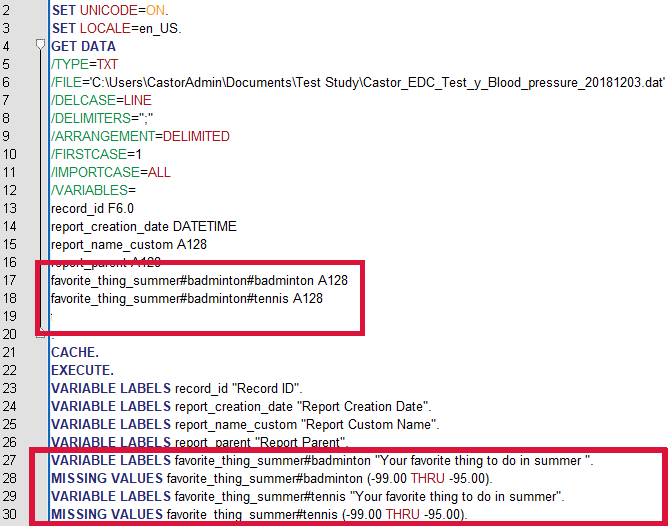