We're rolling out a new overview for the global Verifications page. Users will now be able to access a table with all completed fields that are pending SDV (Source Data Verification).  This will help them keep track of their work and allow them to directly open data entry on the same step where that particular data point is located. We’ve also added a set of filter criteria and sorting possibilities, to facilitate the completion of tasks and improve navigation. 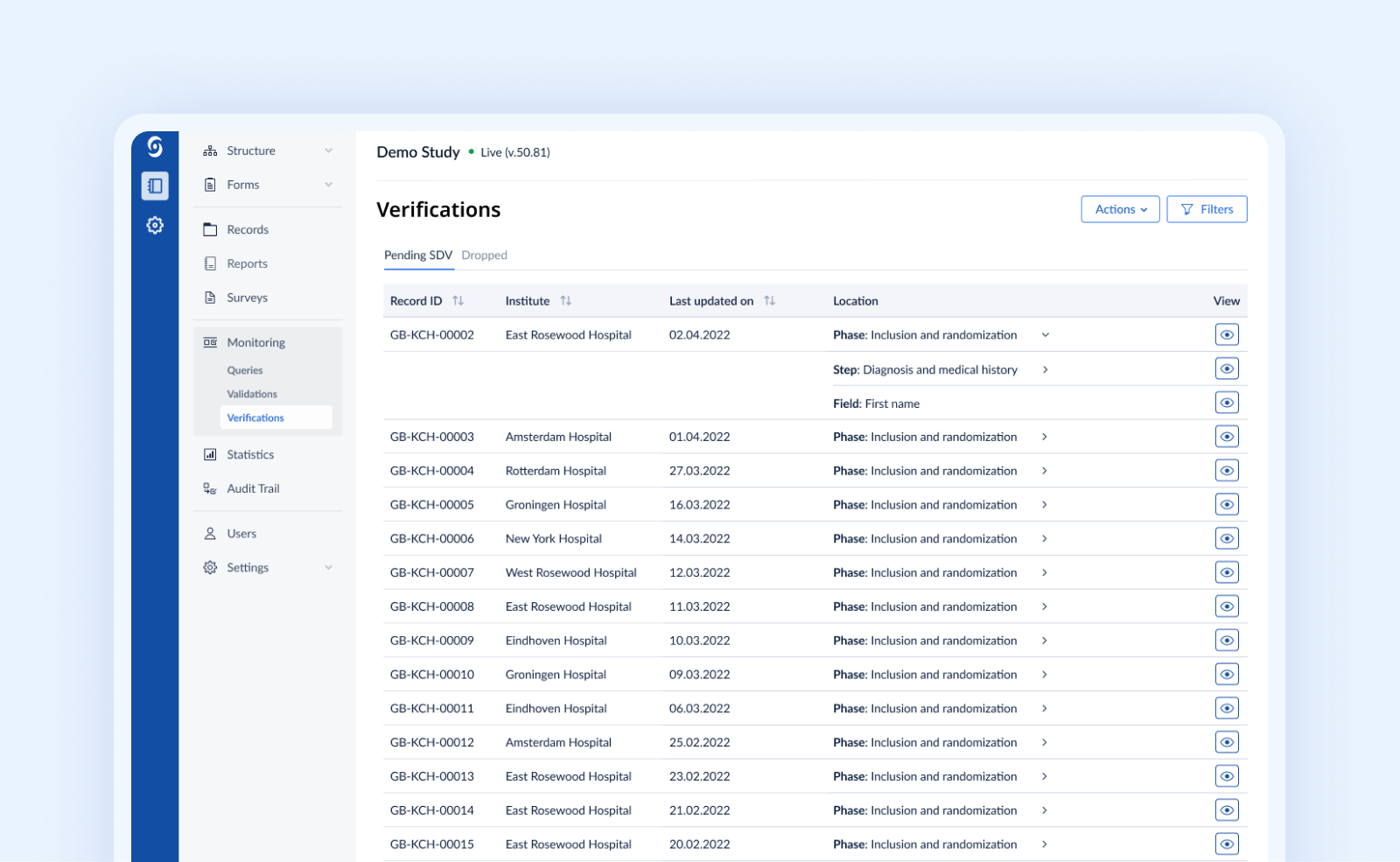 At the moment, this view only includes fields that are required and have been completed. But we are working on separating the required field property to allow a more targeted approach to your SDV needs in upcoming releases.

We've extended the list of available languages for the participant view of web surveys. Now, studies can reach a broader pool of patients, as we've included Swedish, Czech and Polish to the already existing languages.

In order to improve usability and maintainability, we have modernized the following parts of the survey management part of CDMS:

In addition to this, the completion of training surveys in the Castor Connect app will now be recorded on the audit trail of the study as its own event.

Fixed all table headers and allow for scrollable body

We've updated the redesigned views where a table is present, to make sure all table headers components are fixed, allowing the user to easily scroll within the table itself and still be able to see the relevant column headers.

Positioned the pagination sticky to the bottom

We've also fixed the position of the pagination component, allowing the user to always reach it in order to go to another page.

To enhance the security of CDMS, we have introduced the reCAPTCHA functionality to all actions that include sending emails with custom text. From now on, any suspicious activities of CDMS users in these flows will invoke a reCAPTCHA challenge.

We have redesigned the entire Audit trail overview for a friendlier experience and in preparation for future improvements. 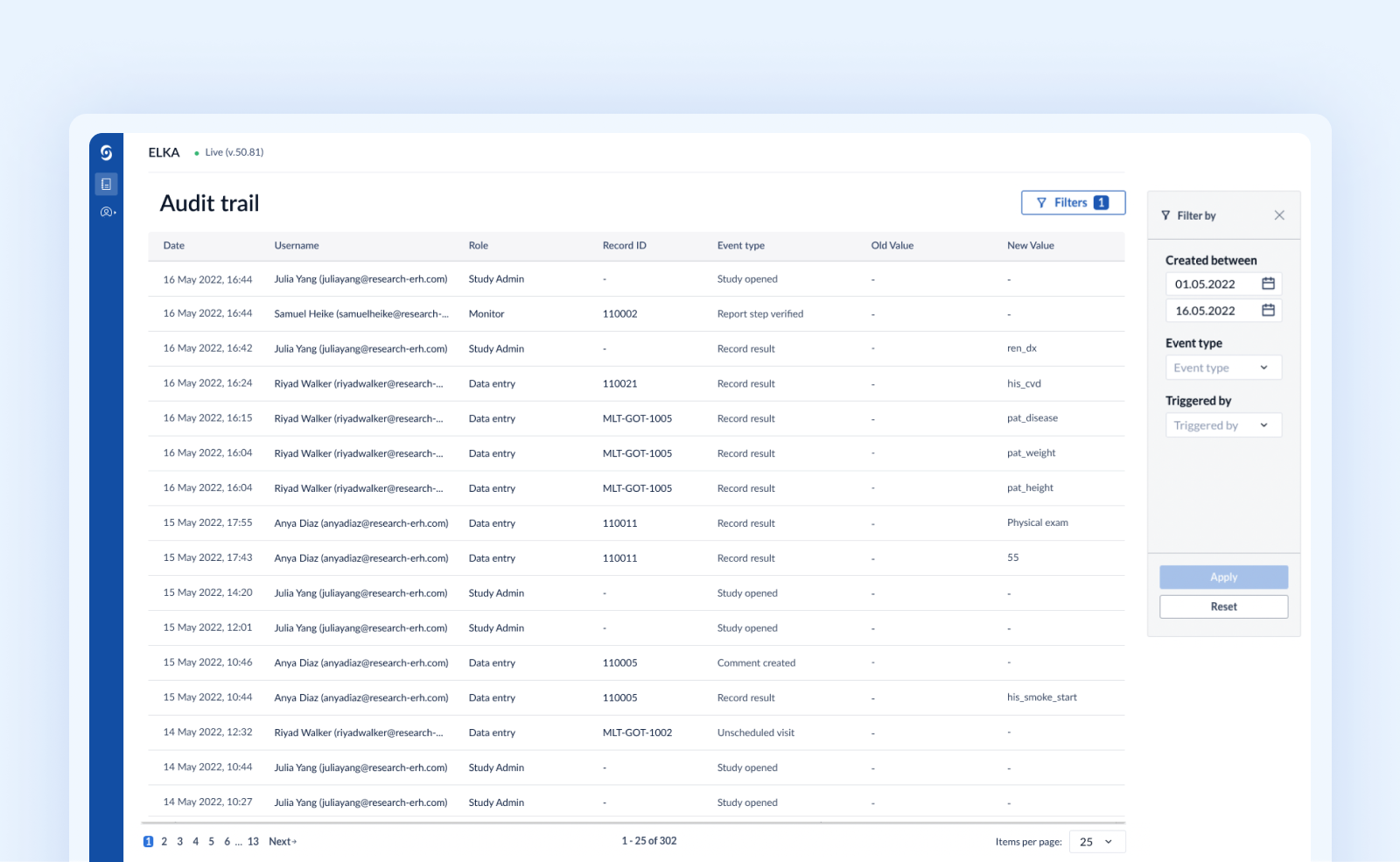 We've also introduced a user role column for all new events where the user role is available. This is stored statically and corresponds to the granted role for a user on the institute on which a specific event has been triggered. The role will not appear for any events that were registered prior to this release.

The entire filter panel has also been redesigned to correspond to other similar tables, improving its usability. The filtering options have been kept and moved to new, more user-friendly components that allow for better overall usability and experience. We have also included a date filtering option that allows users to filter audit trail results using 'Created between'. This date range allows for selecting only the start or the end date, as well as both.

In addition to that, users will simply have to click on the row of an event in order to access the detailed information in a modal dialog. If the event doesn’t contain any other information than the one already displayed in the table itself (ie 'Study opened'), no dialog will be shown.

Besides that, you’ll find that the table header is now fixed on the page, so users can easily scroll the table below and keep an eye on the information displayed on the available columns.

The pagination component has also been replaced with a new component, allowing users to experience the same behavior as seen on other pages that were redesigned recently.

We have improved our import capabilities for the data format CDISC ODM-XML. From now on, users will be able to import files with multiple visits using the same form. We also implemented a mechanism to sanitize the variable names upon import.

There’s now a new way for our Customer Success team to support adjustments of custom features.

We’ve also introduced additional logging to our customer-specific features to allow our teams to deliver support even faster.

We're introducing a new feature that allows study admins to decide if the record IDs should be reused in a sequential manner after having archived and/or deleted some of the records.

This feature will be disabled by default on all new studies, while for existing studies this will be enabled to ensure study continuity.

This feature will not be accessible via the interface. To activate it, please reach out to our Castor support team at support@castoredc.com and provide the ID for the study on which you'd like this changed.

We have extended the /study/{study_id} endpoint to allow API users to use Trial Registry IDs in research reporting. Please refer to our API documentation for additional details.

Users that operate on the Step or Phase views on the Records overview can now also sort the “Record” and “Institute” columns in ascending or descending order. This works across all available pages. Please, note that changes on the record ID generation strategy, or the institutes, can render some unexpected results after sorting is applied. We advise you to keep the ID generation strategy changes to the minimum to ensure consistent results when sorting.

Redesign of the option group modal

The modal allowing users to add and edit Option Groups has been redesigned to allow for more Option Groups features to be added in the future.

Other improvements to our codebase

We delivered a set of updates to our codebase to improve performance and security of Castor CDMS.

We’ve fixed some defects that were reported by users or identified by us.

A table's scrollbar can sometimes overlap with the table column on a Chrome browser.

We've been working on updating the key terminology used in our system, and even if it’s not included in this release, we wanted to give you a heads up. In the release planned for August, the Castor CDMS platform users will benefit from seeing a language and terminology that is more aligned with the industry standard, thus improving the learning curve and overall experience on our platform. For example, “Institute” will be renamed to “Site” throughout the platform.

You can read more about this on this helpdesk article.

The release expected for August (2022.3.0) will also bring some changes to the API users, and we wanted to give you a heads up!

We will be extending the record progress endpoint to return a percentage, in order to help API users keep better track of their study and so it aligns with what’s shown in our interface. This means that the endpoint /study/{study_id}/record-progress/steps will be expanded with the field “progress - percentage of progress”.

We are also planning to gradually introduce rate limiting for selected API endpoints, in order to ensure proper performance of our service. That will be done with HTTP RateLimit Header, which will be present in the API responses starting with 2021.3.0. However, the Rate limiting will not yet be enforced, meaning that 429 HTTP response code will not be returned even if the quota has been reached or exceeded.

The list of endpoints for which we will enforce rate limiting will be communicated well in advance. In the meantime, please read our API developer policy and review your API integrations to make sure they can handle rate limiting responses, specified as having a 429 HTTP response code.

We have fixed a defect that blocked the 'Survey package completed' notification to be sent out to selected recipients.

Client unable to open records in one study

We have fixed a defect found on a private cluster that was blocking records (participants) to be opened in data entry view.

We have fixed a defect regarding cross-checking institute (site) permissions properly on the global report (repeating data) listing.

We have fixed an audit trail related defect, causing the 'Survey printed' event to not be properly logged.

We have resurfaced the seconds on the audit trail data listing, to allow studies to track logged events in more granularity.

We have updated the banners shown when there’s a new release, for both major and maintenance release, making them more informative and including links to the release notes.

New features and / or  enhancements

We've made changes that allowed reducing the download size of the application by compressing embedded source maps.

We've updated the options selected by default when creating a survey package using an in-form survey package button. They were erroneously changed as part of updating that modal, but have been restored to their previously expected default behavior.

We've addressed a defect affecting some studies, that resulted in the Audit Trail not being accessible.