Added features and / or functionalities

Besides migrating all previous functionalities, information and features of the Monitoring module in a new interface that is more intuitive and easy to use, we’ve introduced a few new features to the Queries overview.

The queuing is the main change in this release underlying all the Castor EDC functionalities. Adding the queue mechanism to sending emails allows the more confident, fail-safe and streamlined emailing and communication with studies participants and Castor EDC users.

The fully self-serviced SAS export feature is ready. The users are able to export study data in the SAS format of choice (SAS XPT or SAS 7BDAT). The new options are available in the records export dialogue. As the study data can have a significant size, the user requesting export will be notified upon export completion by email and provided with a direct link to our newly designed download area. 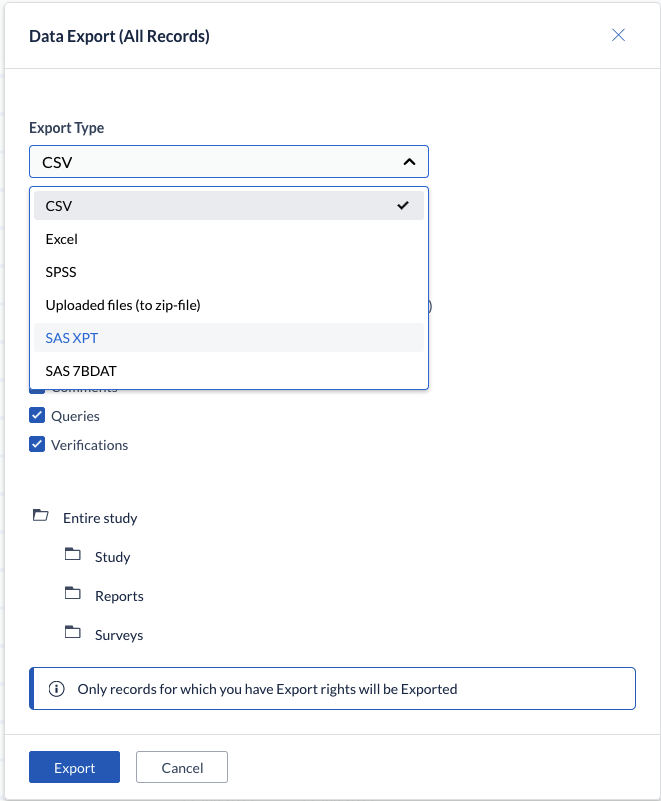 This feature currently is available upon customer request. To enable it please contact Castor support.

With this release, we are updating the Castor EDC API. To facilitate large reports datasets retrieval, Castor EDC API now allows filtering the response on the base of the “archived” property. Moreover, API users are able to search the specific record by different field values. This enhancment on the GET records endpoint is also working with encrypted data.

We have also allowed API access for the encrypted fields. This allows users using third party encryption providers like Trusted Reversible Encryption Service (TRES) to work with data on their premises.

Removed features and / or functionalities

No notable features or functionalities have been taken out of scope or removed from EDC in this product release with the exception of:

Improved & extended features and / or functionalities

With this product update, we have introduced a series of improvements and enhancements to existing functionalities in EDC. A more detailed description of these, broken down by category, can be found below.

A series of production defects have been fixed and included in this product update.

A summary of these is listed below: