It is possible to easily create a copy of a study that automatically duplicates the structure of the originating study with the Form Sync feature.

Introduction to the Form Sync feature

No other properties of the Production study will be copied, such as the study settings, users, user rights & roles, participants or automations.

How does the Form Sync feature work

Form Sync feature is enabled by default for all studies and can be found in the StudyStructure tab: 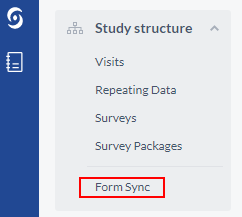 Form Sync uses identifiers to map elements between the two linked studies. The unique identifiers are unique across the entire study and automatically generated by the system.